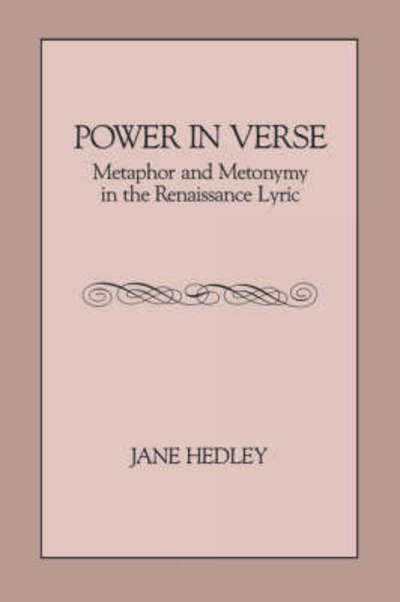 Power in Verse: Metaphor and Metonymy in the Renaissance Lyric

Power in Verse: Metaphor and Metonymy in the Renaissance Lyric

English lyric poetry from Wyatt to Donne falls into three consecutive stylistic phases. Tottel's Miscellany presided over the first, making the lyrics of Wyatt and Surrey available for imitation by mid-century poets like Barnabe Googe, George Turberville, and George Gascoigne. The Shepheardes Calender and Sidney's Defense of Poesy ushered in the second, the Elizabethan or "Golden" phase of the 1580s and 1590s. In the third phase Donne and Jonson, reacting against the stylistic orientation of the Elizabethan poets, reconceived the status of "poesy" and resituated the lyric for a post-Elizabethan audience.

Chapter 7 is shared between Donne and Jonson, post-Elizabethan writers who used metonymy to subvert the metaphoric stance of Elizabethan poetry. In a Postscript Hedley takes on the "metaphysical conceit" for a final demonstration of the explanatory power of Jakobson's theory of language.

Professor Hedley uses the semiotic theory of Roman Jakobson to create stylistic profiles for each of these three phases of early Renaissance poetry. Along with the poetry itself she reexamines contemporary treatises, "defenses," and "notes of instruction" to highlight key features of poetic practice. She proposes that early and mid-Tudor poetry is "metonymic," that the collective orientation of the Elizabethan poets is "metaphoric," and that Donne and Jonson bring metonymy to the fore once again.

Chapter 1 sets out the essentials of Jakobson's theory. Hedley uses particular poems to show what is involved in claiming that a writer or a piece of writing has metaphoric or a metonymic basis. Chapter 2 explains how the metaphoric bias of Elizabethan poetry was produced, as "poesy" became part of England's national identity. This chapter broadens out beyond the lyric to include other modes of writing whose emergence belongs to an Elizabethan "moment" in the history of English literature. Beyond chapter 2, each chapter has a double purpose: to create stylistic profile for a single poetic generation and to highlight a particular aspect or feature of the poetry as an index of difference from one generation to the next.

In the third chapter Hedley shows how Wyatt and Surrey used deixis metonymically to give their poems particular occasions. Chapter 4 explains how the metonymic bias of the mid-Tudor poets affected their use of metaphor, and highlights Gascoigne's appreciation of a metaphor as a social gambit or an instrument of moral suasion. Chapters 5 and 6 are centered in the Elizabethan period, but with perspectives into earlier and subsequent phases of metonymic writing. In chapter 5, a comprehensive discussion of the sonnet and the sonnet sequence shows how metaphoric writing cooperates with the "poetic function" of language. Chapter 6 deals with love poetry, as a social/political activity whose orientation differs radically from one generation of English Petrarchists to the next.