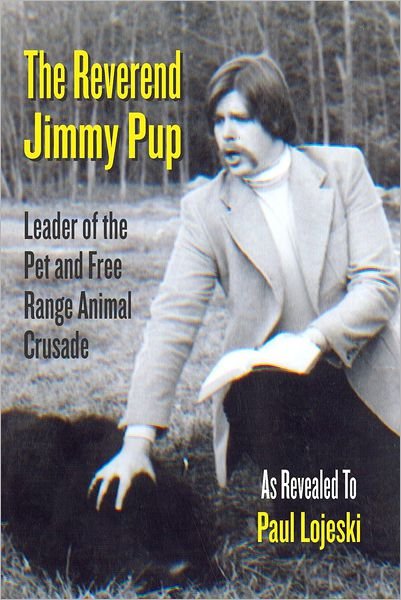 Publisher Marketing: This hilarious send up of fundamental fundamentalism follows the exploits of one Jimmy Pup, from broken and broke, unemployed frycook hiding in a filthy Las Vegas motel room to the heights of worldwide religious fame as leader of the Jimmy Pup Crusade for Pets and Free Range Animals. His climb to sanctified prophet begins when, unshaven and unkempt and smelling really bad, he see a vision on the crummy, black and white TV in his two bit motel room: he sees the Great St. Bernard who reveals himself as God of all Gods and imparts on Jimmy the task of unifying humans and animals into one glorious, harmonious world of peace and prosperity. Redeemed and Saved in all matters earthly and spiritually, Jimmy enlists the aide of the wealthy, real estate nudists, Harry and Rachael Straight who move him to their palatial horse farm in Scottsdale, Arizona, where Reverend Jimmy builds his church with the aide of the talking dog, Jasper, most likely the son of the Great St. Bernard, in the flesh. Along with the famous, aging rock star, Nicky Stevens and a cast of assorted nut cases, including Jimmy Pup's Mother and her helper, Weird Girl, they fight off enemies galore, even as they build, despite violent rocket fire, pistol assaults, and outright betrayals, the first real estate development to accommodate pets and other animals, along with job training and language courses to ease their transition into the Good Life. In the end, after bloody battles, The Reverend Jimmy Pup prevails, establishing Himself and his Crusade as the preeminent religious institution in the world. Finally, pets and free-range animals and even fish are reunited with humans, as they were in the beginning, when creation brought forth them all onto this burning plain. Amen! See Reverend Pup at funnyordie.com/revjimmypup