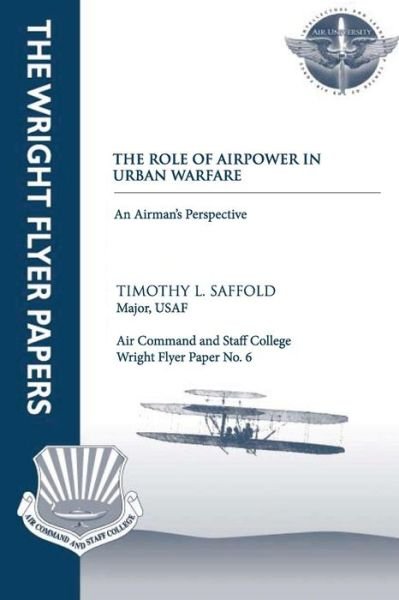 The Role of Airpower in Urban Warfare: an Airman's Perspective: Wright Flyer Paper No. 6

The Role of Airpower in Urban Warfare: an Airman's Perspective: Wright Flyer Paper No. 6

Publisher Marketing: Increased emphasis on urban warfare creates an urgent need for airmen to focus serious thought toward what airpower's role should be in this difficult environment. Traditionally, military forces have viewed urban warfare as infantry action executed at the tactical level of battle. This emphasis on surface force employment stifles innovative thought as to how military forces can achieve operational and strategic effects by employing airpower as the key instrument of force in urban warfare. Airpower plays a unique and decisive role in urban warfare by exploiting the very characteristics that limit surface forces on urban terrain-small operational units, close range weaponry, presence of civilians and their property, defensive bias, and absorption of manpower. Understanding the role of airpower requires this study to examine first why military forces should consider urban warfare so important. Then, the study analyzes the urban environment to explain why these characteristics make airpower the key instrument of force. Airpower's contribution is weighed against those characteristics to show that only airpower can achieve battle space dominance by matching targets, weapons, desired accuracy, and platforms in near real time operational-level actions that achieve operational 'and strategic effects. Finally, an airpower theory for urban warfare is proposed. Airpower, via the integrated application of C4ISR and precision strike supported by other forces, is the only instrument of military force that can effectively prosecute urban warfare by shaping and controlling the battle space through precise applications of lethal and nonlethal force that nearly simultaneously affect the tactical, operational, and strategic levels of urban combat. Contributor Bio:  Air University Press Walter Gary Sharp Sr. serves as a senior associate deputy general counsel for intelligence at the US Department of Defense, where he advises on legal issues related to intelligence, covert action, intelligence and counterintelligence policy, intelligence oversight, information security, information sharing, security classification policy, information operations, and computer network operations. Prior to his appointment, Dr. Sharp served as an associate deputy general counsel for international affairs at the Department of Defense; the director of legal research for international, comparative, and foreign law at the Law Library of Congress; the director of global and functional affairs within the Bureau of Legislative Affairs at the State Department; and a principal information security engineer at The MITRE Corporation. A veteran with 25 years of service, Dr. Sharp retired as a decorated US Marine Corps lieutenant colonel with prior enlisted service. His military assignments include commanding officer of a field artillery battery, senior prosecutor, deputy legal counsel to the chairman of the Joint Chiefs of Staff, and international law adviser for the commanding general of the Unified Task Force in Somalia during Operation Restore Hope. Dr. Sharp's military decorations include the Defense Superior Service Medal, and his many awards for writing excellence and academic achievement include the Judge Advocate General's School Alumni Association Annual Professional Writing Award and an American Bar Association Award for Professional Merit. Dr. Sharp is the author of numerous articles and three books: UN Peace Operations (1995), CyberSpace and the Use of Force (1999), and Jus Paciarii (1999). He serves as an adjunct professor of law at Georgetown University Law Center where he currently teaches a counterterrorism course, The Law of 24. He has also taught graduate-level seminars on United Nations peace operations and international peace and security. He lectures internationally in universities and other diverse public forums on wide-ranging topics of international law and national security law, such as international peace and security, conflict management, and peacekeeping operations.